Paris Saint-Germain Judo are delighted to announce the signing of Marie-Eve Gahié and Romane Dicko for the 2020-2021 season. The two French athletes, who compete in the under 70kg and over 78kg categories respectively, will be signed to the Club for two years. 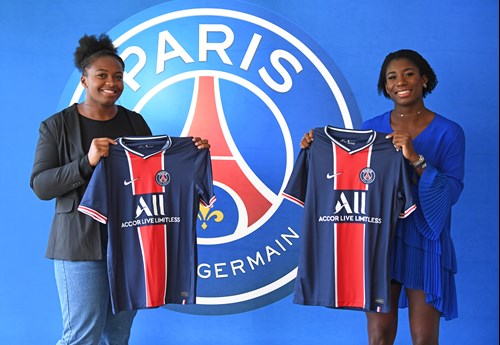 Marie-Eve Gahié won her first major title in 2013, in Miami, thus becoming World Champion in the Cadets section. She then won the gold medal in the European Junior Championships in 2016, in Malaga (Spain), before clinching the title of French Champion in the Seniors section a few months later. In the World Senior Championships in Baku (Azerbaijan) in 2018, she won two silver medals, in the individual and team events.

In 2019, at just 22 years of age, the Paris native was crowned World Champion in Tokyo, and also won a silver medal in the World Championships team event. Next year, she will travel to the Japanese capital to compete in her first ever Olympic Games. Marie-Eve Gahié has already amassed 66 national and international medals since the start of her career.

“Having grown up in the 15th arrondissement, a Parisian girl through and through, the decision to join Paris Saint-Germain Judo was a natural one,” said Marie-Eve Gahié after signing her contract. “Training with such an outstanding athlete as Teddy Riner and learning from him every day is a great opportunity for me. As is joining my home city’s club. Finally, the involvement of Nicolas Mossion, the coach I started out with, and Laurent Calleja also helped me make my decision, as did the Club’s sporting project and objectives for the next few years.

In 2016, Romane Dicko became French Champion in the over 70kg Cadets section and French Champion in the over 78kg Seniors section, despite not yet having her black belt. That same year, she won both the individual and team events at the European Cadet Championships in Vantaa (Finland). She also triumphed in the European Junior Championships in 2017, in Maribor (Slovenia).

In 2018, she was crowned European Senior Champion in Tel Aviv (Israel). Deprived of competing for over a year due to injury, she made her comeback in 2019. In early 2020, she pocketed her 33rd and 34th medals when she won the Tel Aviv Grand Prix then the Paris Grand Slam.

“I feel extremely proud today,” confided Romane Dicko after her signing. “I am joining a world-class club, a club that has managed to establish a first-rate facility for its judo branch. I can’t wait to start training with the Club’s staff and the other athletes. It has everything I need to continue improving and fulfilling my potential.”


“Two of the best French judokas of their generation”

“We are delighted to welcome Marie-Eve and Romane into the fold,” announced Djamel Bouras, chairman of Paris Saint-Germain’s judo branch. “Firstly because these young women are two of the best French judokas of their generation, and secondly because they perfectly embody the values of excellence and commitment that are encouraged by Paris Saint-Germain. I am sure that their involvement will help the Club to grow and raise its profile both in France and abroad.”