The Paris Saint-Germain Endowment Fund, the charitable arm of the preeminent sport club in France, and KLABU (Swahili for ‘club’), a Dutch social start-up which provides access to sport in refugee camps, today announce a groundbreaking multi-year project. Together and with the full support of UNHCR, the UN Refugee Agency, they will build sport Club Centres for thousands of refugee and host community young people living in and near refugee camps, the first of its kind to be opened at a refugee camp by a sports club. They will support these initiatives through social enterprise, creating sport kits for the world to wear.

Today, more than 80 million people have been forced to flee their homes globally, of whom almost half are children. The Paris Saint-Germain Endowment Fund and KLABU invite the world to connect with refugees through the universal spirit of sport and the celebration of human potential. The project, which has now been in the works for almost two years, aims to unlock the power and joy of sport through community-driven projects, which will be kicked off at the single largest refugee camp in the world at Cox’s Bazar, Bangladesh. The initial goal is to reach 10,000 refugee and host community children, and their family members.

The Club Centres, managed by the local community, work as sport libraries, providing access to sport kits and equipment. Children can participate in training sessions and tournaments, watch sport matches together, and enjoy gaming and online connectivity. In short: the Centres are safe spaces where young people and their family members can develop physically and emotionally, by finding relief from their hardships and pleasure in the practice of sport.

The launch is supported by a global awareness campaign titled “Defined By Spirit” to get people to look beyond the traditional narrative of hardship and dependency in refugee crises. The Paris Saint-Germain Endowment Fund and KLABU have created a product collection which will raise proceeds and awareness for the cause, available in Paris Saint-Germain and KLABU stores for everyone who wants to support the mission.

“Paris Saint-Germain is proud to be able to support such an honourable cause. Access to sport should be a basic right for any child around the world, regardless of their background or circumstances. Through this project we look to build on the already extensive humanitarian efforts the Club has undertaken overseas. Together with KLABU, UNHCR and other partners, we hope to give a portion of the 80 million who are fleeing from challenging circumstances a sense of relief and of belonging. This project has been under development for almost two years now, the road has been long, but we hope the timing of its delivery will be a small yet welcome relief to refugee children, and to the further communities we hope to reach in future.” said Paris Saint-Germain Chairman and CEO Nasser Al-Khelaifi.

“UNHCR is pleased to collaborate in this project to help young refugees to participate in sport activities and strengthen social cohesion with their host communities. Sport gives refugee youth a chance to heal, to be protected and to develop their skills. Sport is also a universal language and the personal engagement of great football players is a source of inspiration and hope in a better future for refugees”, said Paolo Artini, UNHCR’s Representative in France.

KLABU founder Jan van Hövell added “It is a dream come true to bring together Paris Saint-Germain with thousands of boys and girls admiring the team. This joint effort with refugee communities reduces the isolation of young overlooked people connecting them with the world at large, through their club, their pride, their KLABU. As the first football club to support us in our efforts, we couldn’t have wished for a better partner to make this happen.” 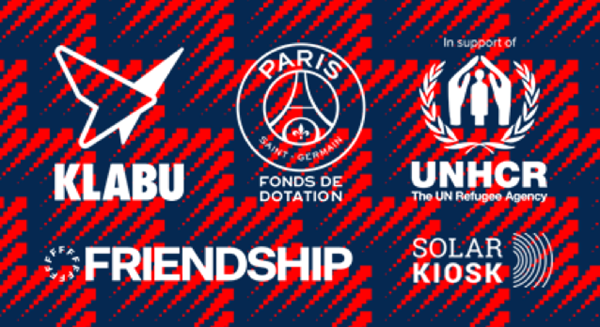 This first phase aims to be launched this autumn by KLABU and the Paris Saint-Germain Endowment Fund in partnership with the distinguished Bangladeshi NGO Friendship, which runs healthcare and education programs for the Rohingya refugees and Bangladeshi host community children. Over a million Rohingya, a stateless Muslim minority, have been forcibly displaced from Myanmar in successive waves of violence since the early 1990s. The project’s Club Centre has been co-designed by partner Solarkiosk and will be implemented by Friendship and KLABU under the supervision of Solarkiosk.

In addition, Friendship, KLABU and the Paris Saint-Germain Endowment Fund will also deliver an innovative mobile sport library solution that will widen the reach across refugee camps and share the power and joy of sport with the larger community.

Following this first phase at Cox’s Bazar, KLABU, the Paris Saint-Germain Endowment Fund and UNHCR will work to potentially expand into other parts of the world.

Runa Khan, founder and executive director of Friendship: “We thank the Paris Saint-Germain Endowment Fund, KLABU, and UNHCR for taking this initiative, which will not only promote mental wellbeing of Rohingya children but also help them recover from stress and traumatic experiences they have been through.”

Thomas Rieger, co-founder and CEO of Solarkiosk: “We are happy and proud to be part of this truly impactful project and enable and empower young refugees with our solar solutions which are tailored for remote and off-grid areas worldwide.”